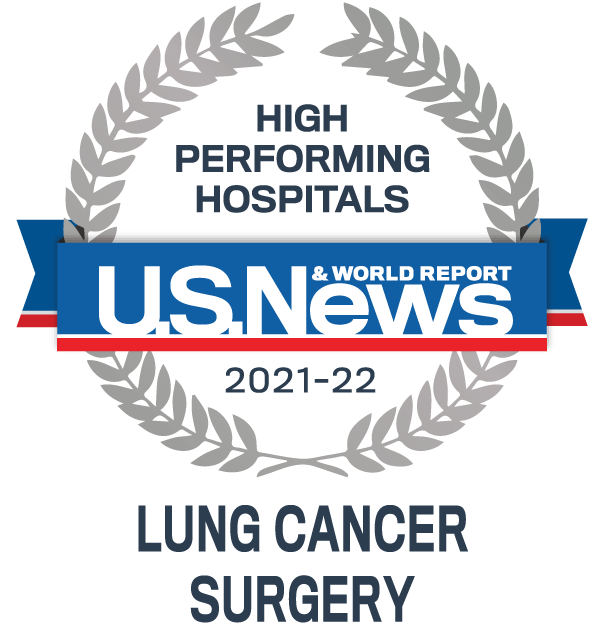 Most patients with early stage lung cancer are asymptomatic (show no obvious symptoms). For these patients, a minimally invasive video-assisted surgical procedure may be a preferred approach to removing the cancer.

Should I Get Screened?

The Lung Cancer Risk Profiler determines if you need to be screened for lung cancer. The recommendation is based on your age and smoking history. Other risk factors for lung cancer are also assessed.

Get a Lung Cancer Screening at GW Hospital >

Surgery to remove the cancer in the affected lobe of the lung (lobectomy) is the standard of care for treatment of early-stage non small-cell lung cancer (stages I and II).

As opposed to a thoracotomy, which involves cutting into the side of a patient's chest to remove all or part of the lung, surgeons now use less invasive procedures to removing lung cancer.

Robotic Video Assisted Thoracic Surgery, using the the daVinci robot, offers surgeons both 3D Visualization of the surgical field as well as more flexible instrumentation. Just as with the VATS procedure, robotic surgery does not require the spreading of the ribs and results in smaller incisions which could mean less post-operative pain and a shorter hospital stay. During robotic surgery, the surgeon makes small pencil-sized holes in the body and inserts robotic arms. A camera is also inserted to provide a 3-D magnified view of the surgical site.

Podcast: Should I Get a Lung Cancer Screening?

Keith D. Mortman, MD, FACS, FCCP, discusses the option for lung cancer screenings of those at high risk of developing the disease in this health education podcast. Since it often has few symptoms until the late stages, this screening can provide critical time for treatment.

Listen to the podcast

There were no results for your search.