Director of Cardiac Surgery and Clinical Professor of Surgery 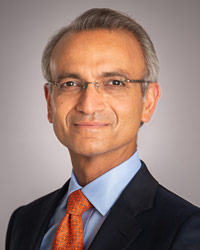 Dr. Najam earned his Bachelor of Medicine and Bachelor of Surgery degrees in 1991 from King Edward Medical College in Pakistan. He attended the Brooklyn Hospital Center/New York University where he was an intern and a second-year resident in surgery. He completed a residency in surgery at Morristown Memorial Hospital/UMDNJ in New Jersey, where he served as a senior resident in general surgery, later becoming chief resident. He served as chief resident of cardiothoracic surgery at The George Washington University Medical Center and was later named chief resident at the Cleveland Clinic Foundation’s Department of Thoracic and Cardiovascular Surgery. In addition, he participated in fellowships in cardiovascular surgery at the Children’s National Medical Center and the Veterans Affairs Medical Center in Washington, DC. From 2002-04, Dr. Najam practiced as a Clinical Associate in the Department of Thoracic and Cardiovascular Surgery at the Cleveland Clinic Foundation. He is a fellow of the American College of Surgeons.

Dr. Najam was the recipient of the Colonel Abid Hussain Gold Medal. He also received the Ames L. Filippone Jr., MD Chairman’s Award in Surgery from Morristown Memorial Hospital. Dr. Najam’s book “Robotic Surgery” was awarded the Book of the year award by the British Medical Association in 2009. He has been named the Washingtonian Top Doctor in the field of Cardiac Surgery by his peers in 2012, 2014 and 2015.

Dr. Najam has conducted numerous oral presentations, both at the national and international level. His professional memberships include the Society of Thoracic Surgeons and the Cardiothoracic Surgery Network. He is also a diplomat of the American Board of Thoracic Surgery.