Just 29 Years Old, He Never Thought He'd Be Fighting for His Life

On March 10, Francis Wilson was going about his day when he first noticed a slight cough. "It's just allergies," he thought. He was finishing up his last semester of law school at George Mason University and working full-time at a think tank in Alexandria, Virginia. People were just becoming more aware of COVID-19, but measures like social distancing had not yet been implemented. Besides, Francis thought he was too young and healthy to be seriously impacted by COVID-19.

Over the next six days, his cough developed into stomach cramps, severe headaches and random chills. "I took off work just to be careful," he said. He remembered reading online not to go to urgent care or the hospital except for more serious issues, so he held off. About a week after that first cough, his respiratory issues got so bad he couldn't breathe. He finally went to urgent care, worried about what was happening to him. "I tested negative for the flu and positive for pneumonia," he said. They sent off a COVID-19 test, and he went home to wait for the results.

"I'm normally pretty stubborn when it comes to going to the doctor," he said. "Frankly, aside from, childhood, I haven't had the flu ever. I didn’t have pre-existing medical conditions ... I figured this wasn't anything too major." But by March 19, when he could barely make it from his bed to the bathroom, he called 9-1-1 and was taken to a hospital in Arlington and admitted.

His breathing problems were worst when he went from lying down to standing. "When I'd stand up, my oxygen levels plummeted," he said. At the hospital, Francis received positive COVID test results. He was shocked.

"I spoke with a doctor, and my lungs were so damaged at this point, they suggested putting me on a ventilator for two to five days," he said. Ventilators can be used to help patients when they are suffering severe respiratory distress, but this is a big step and involves being put to sleep, making arrangements for your personal commitments, and also the uncertainty of not knowing what will happen. Will your condition improve, when will you wake up, and what if you don't get better? It is a big decision to make.

Worried about the rapid decline in his health, he decided to go on the ventilator. "I contacted my family, my school, my work, and made arrangements for my pets (his hedgehog and pet snake)," he remembers of those last minutes before he was put under.

Moving to a Higher Level of Care 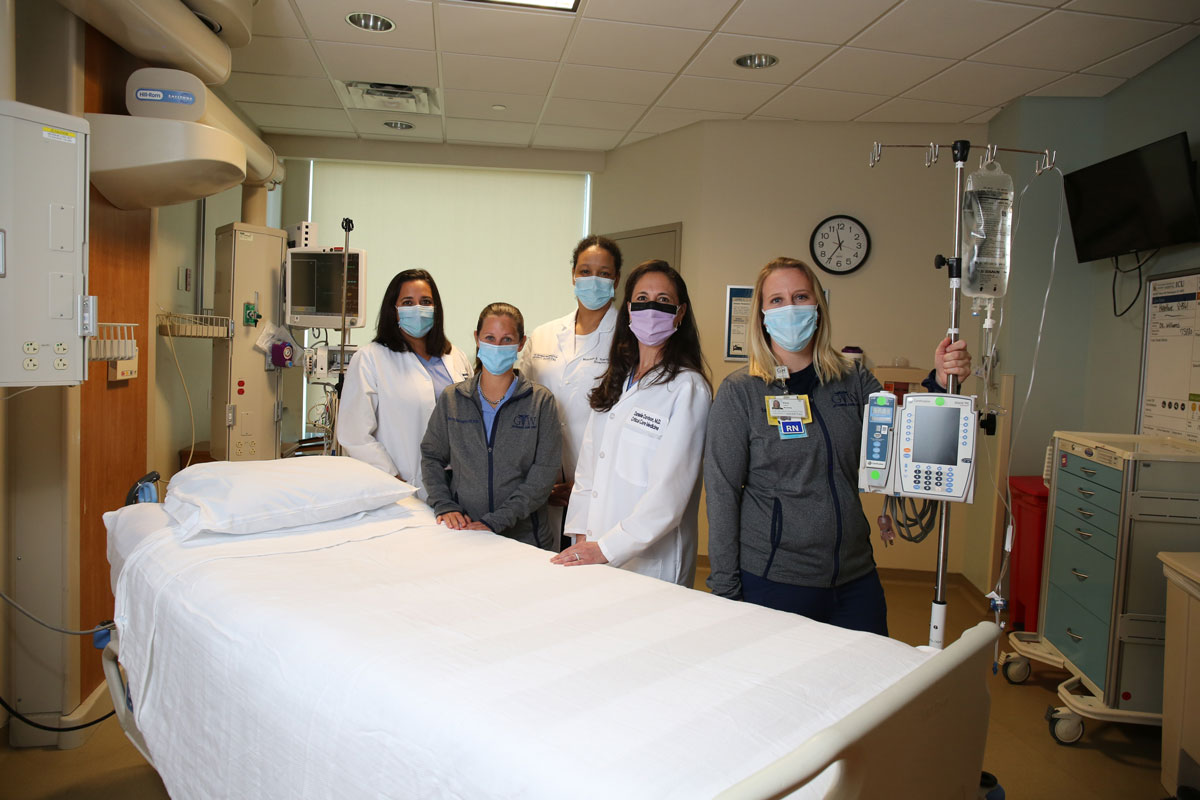 After a week on the ventilator at the hospital in Virginia, his lungs deteriorated so greatly that his condition became dire. It was at this point that he was transferred to GW Hospital, where doctors are equipped to deliver advanced care, using innovative technology like the extracorporeal membrane oxygenation machine, or ECMO. ECMO requires a highly trained staff to manage the advanced technology, which essentially does the work of the lungs, heart, or both, while giving the body time to heal. While ECMO is potentially lifesaving, it is a highly complex procedure that comes with certain risks, such as blood clots or life-threatening bleeding. It is an option for only the most seriously ill patients who meet the criteria.

Francis qualified for ECMO. Surprisingly, his body began to rebound quickly on its own thanks to the collaborative treatment of his GW Hospital team. Advanced ventilator management, supportive care and antibiotic treatment helped him to make a full recovery.

In the battle to defeat this new virus, there has been a frantic search to discover "magic bullet" therapies, says Infectious Diseases physician Hana Akselrod, MD, who was part of Francis' multidisciplinary team. But she cautions about the difficulty in reaching such a conclusion and points to the collaborative teamwork instead. "With any critically ill patient, there are so many variables that it is hard to isolate any one as the specific reason why they get better or not, but I would credit the excellent team-based care at the GW ICU with his recovery," she says. "I'm grateful that my team got to contribute to his recovery."

Francis was unconscious for a total of 10 days on a ventilator before he woke up at GW Hospital, in a totally different place from where his treatment started, trying to take in all that had happened. After learning that his family had been to see him for last visitation, he recalled what he described as an "out-of-body" experience. "I recalled my family saying, 'Pull through, you can do this,'" he said.

His immediate family includes his parents and sister, and he also has a long list of loved ones and friends who were rooting for him and posting their support on social media.

From the moment he started to feel better, he was determined to help others avoid getting sick like he had been. He began doing virtual media interviews from his hospital bed and appeared on NBC, CNN and other news stations. "Even if you're healthy and unlikely to be killed by this virus, it doesn't mean you won't be an outlier, or that you won't affect somebody else," he said. "It's tricky because statistics can be sliced up different ways," he said. "In one sense I'm an outlier, with such aggressive symptoms. In another way, I'm part of a majority of young people who survived COVID-19."

Francis shared his experience for this article on Thursday, April 2, as he was being discharged from GW Hospital and stepping outside for the first time in two weeks on a sunny afternoon in DC. Much had changed since his first symptoms started in March. Social distancing was in full mode, and the city was all but shut down except for essential workers. Still, for him, a second chance at life was just beginning, and he was extremely grateful for everyone at GW Hospital who helped him get that opportunity. 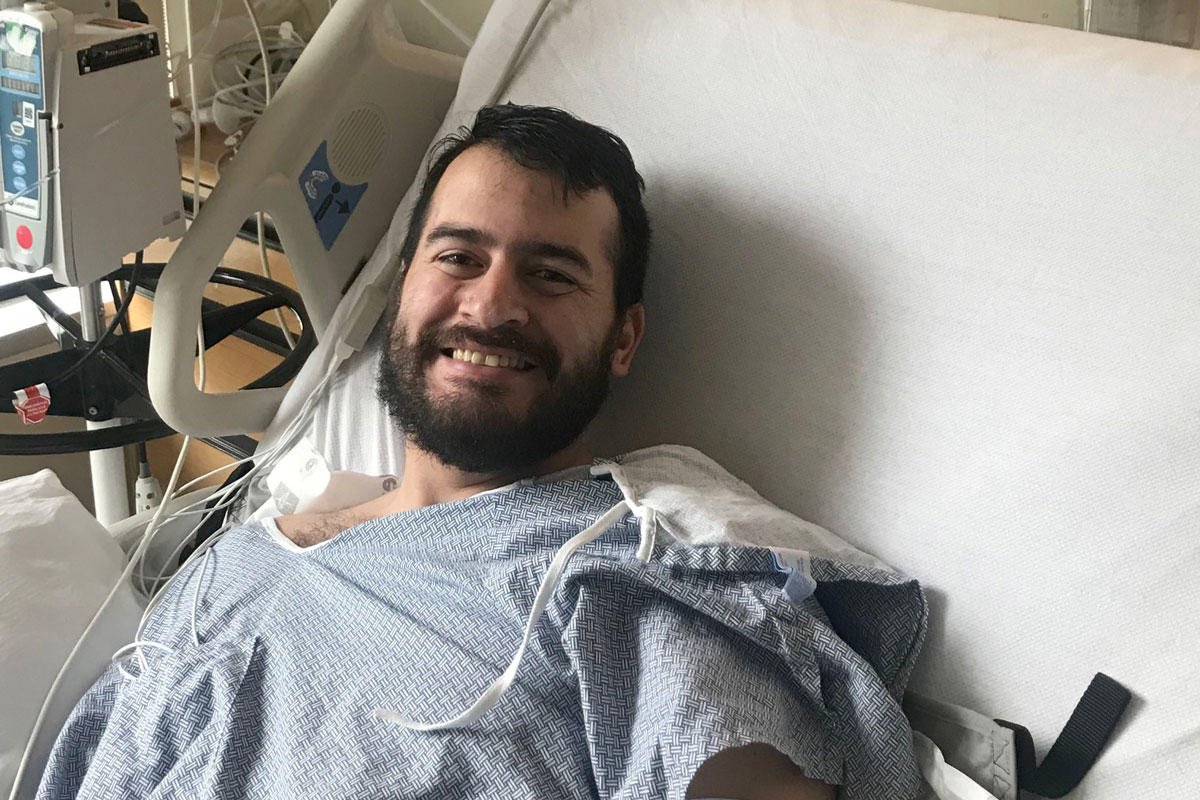 "The nurses I had were incredible, they literally saved my life," he said. "They kind of just chalked it up as, 'It's my job,' but it's more than that," he said. "To me this is my life, to my family it's the life of their son or brother, for my friends, they saved the life of a loved one. While it may be a career to them, it's really much, much bigger."

"I have such an amazing appreciation for the work that everyone here has done," he said. "I would not be here without the amazing care and resources GW hospital has. I'm so lucky to come here."