Virtual reality technology takes patients and doctors inside the brain 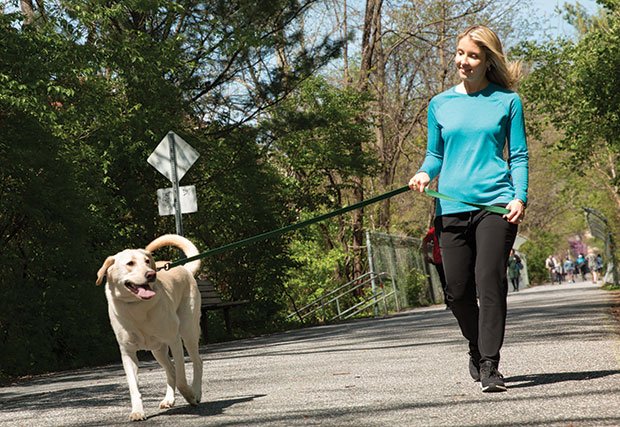 Danielle Collins exercises religiously and makes her health a priority, so when she was suddenly diagnosed with a serious and rare brain condition at age 27, it was a shock. She first realized that something was wrong during a Pilates class, when she felt a sharp pain in her head that continued to bother her for the next couple of days. “It was the worst headache of my life,” she recalls.

Encouraged by her neighbor, she went to see a doctor near her home in Bethesda and discovered that she had a brain bleed caused by arteriovenous malformation (AVM), an abnormal connection between the arteries and veins. “Never in my life had I heard of AVM,” says Danielle. “The worst thing I’d ever had was food poisoning.”

She was admitted to GW Hospital, where her medical team explained everything that was happening with support from Precision Virtual Reality™ technology, an advanced system that gives patients a 360-degree view inside their own anatomy. Using a touch screen and a virtual reality headset, Danielle was able to get different views of her brain by turning her head and moving the joy stick.

She says that seeing the images helped “take away the fear of the unknown,” and she was able to process her diagnosis and treatment plan on a physical and emotional level. It was “revolutionary,” she says.

The technology helps doctors, as well, by enabling them to map out alternate surgical approaches ahead of time and find the safest and best possible option, explains her doctor, Anthony Caputy, MD, FACS, chairman of the Department of Neurosurgery.

In the days before her craniotomy procedure to remove the AVM, Danielle recalls how the doctors and staff went out of their way to reassure her. Along with Dr. Caputy, her “super-team” included Wayne Olan, MD, director of interventional and endovascular neurosurgery; and board-certified neurosurgeon Walter Jean, MD. “I had the best level of care I could have asked for,” she says.

After her surgery, Danielle again used the virtual reality technology, this time to confirm that the AVM was gone. Seeing the results for herself alleviated any potential anxiety and reaffirmed that she was going to be okay. “To be able to see that is amazing,” she says.

She is now fully recovered and back to her active routine. Through her personal experience, she’s been inspired to start the “Healing Home Fund,” an initiative that raises money to help support family members so they can be with their loved ones in the hospital.

Throughout everything that happened, she remains grounded in her faith and says that GW Hospital is where she was meant to be. “The level of care I felt was unparalleled to any I’ve ever felt in my life,” she says.

As Danielle’s story illustrates, virtual reality technology can have a meaningful impact on the treatment of neurological conditions, such as aneurysms, brain tumors, and intracranial and vascular conditions like AVM. It can also be useful in teaching basic surgical anatomy to medical students and educating residents, so they can train on surgical approaches.

Many of the possible uses for the technology are yet to be realized, Dr. Caputy says. Already its application is being expanded at GW Hospital to benefit patients and doctors in the treatment of thoracic conditions.