Spine Surgery Saved Him From Paralysis 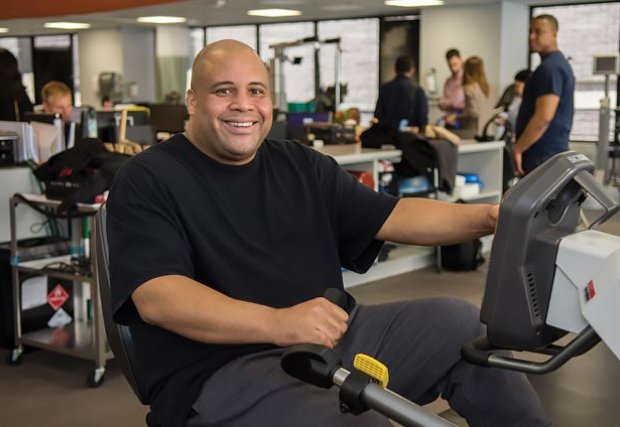 As a former football and rugby player, James Jean-Claude was all too familiar with muscle and joint pain. He started noticing minor back pain, but brushed it aside and dealt with it by taking over-the-counter medications. The pain got progressively worse, to the point of radiating down his back and legs, making it difficult to bend his knees and even walk.

A few weeks later, he experienced worsening symptoms in his hands, and greater difficulty walking. Thinking he was having a possible stroke, James went to the ER at GW Hospital. Doctors ruled out both a heart attack and stroke, and referred him to a neurologist, who saw some unusual reactions to reflex tests and ordered an MRI of James’ neck and spine. The results led him to Neurosurgeon Michael K. Rosner, MD, Vice Chairman, Department of Neurosurgery at GW Hospital.

Dr. Rosner met with James and expressed his concern about the MRI results. “Dr. Rosner told me I had spinal stenosis and that three vertebrae were compressing my spinal cord. He said surgery is always a last resort, but I was beyond conservative treatment. My defining moment was when he told me he was just trying to prevent paralysis and keep me out of a wheelchair,” says James.

Dr. Rosner says the damage to James’ spinal cord was critically severe and correlated with the damage demonstrated by his MRI. “There are never any guarantees with surgery, but he is one of the lucky few to have regained a lot of function,” says Dr. Rosner. “This procedure enabled us to stop any further damage from occurring, and James noticed a significant difference in his pain levels afterward.”

James says the care he received from the doctors, nurses and therapists at GW Hospital was extraordinary. “It was so convenient to have my doctor, surgery and rehab all in one system. I can’t imagine what my quality of life would be without having had this procedure. Everyone took such great care of me!” says James. “I recently finished my therapy and I now have hope for my future.”