Overcoming the Odds Together 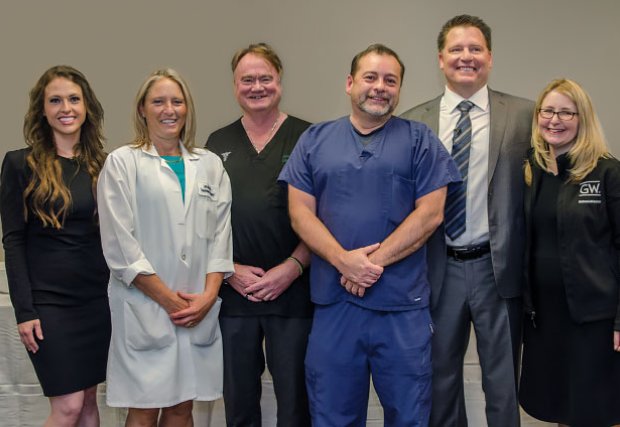 Jonathan’s illness started when he was at home in Los Angeles, getting ready to go to a professional conference in Washington, DC. He is a TV producer, whose work includes shows like “The Kennedys” miniseries and the 2013 movie “Ring of Fire.”

When he began feeling sick before his trip, he went to a hospital in LA, got a shot of morphine and was given the okay to go. Just days later, his condition had taken a mysterious and dramatic turn for the worse, and he was at GW Hospital fighting for his life.

When a rare and mysterious illness suddenly had Jonathan Koch near death, the advanced team at GW Hospital unraveled the complex case and helped him achieve a remarkable recovery.

“His body was not responding to any of the treatments we were providing and he was continuing to decline,” said Lynn Abell, MD.

Jonathan recalls when doctors told him that there was a high probability he would not survive. “I thought about contacting my daughter, she was 15 at the time,” he says. But he didn’t. “I decided I wasn’t going to die because I don’t think daughters should grow up without their daddies if it’s possible not to,” he says.

He called his then-girlfriend of seven years, Jennifer Gunkel, to tell her that things were more serious than he thought. She got on a plane to DC right away.

Fearing that he was in full septic shock, doctors put him into a medically induced coma. “He was near his last breath,” says Dr. Abell. Then came a defining moment that changed everything.

In piecing the clues together, one of the doctors had the breakthrough realization that Jonathan’s illness could be a rare immune disorder known as “HLH” (hemophagocytic lymphohistiocytosis). “It’s basically your immune system in overdrive. There’s some trigger, often times viral, but it’s mostly seen in pediatrics,” explained Dr. Abell.

“The more detective work we did, the more likely it seemed that this really was the diagnosis,” said Critical Care Medicine Director Michael Seneff, MD.

Testing confirmed it; and doctors immediately revamped Jonathan’s treatment to target HLH. “Over just a few days, he started making a quick recovery of his organ systems,” Dr. Abell recalls.

In the long recovery that followed, Jonathan faced many challenges. His body’s intense battle with sepsis had deprived his limbs of vital oxygen, causing painful and irreversible damage to his hands and feet. “The amazing work of Dr. Victoria Shanmugam and Kara Couch was vital to stopping the continuation of the spread of the gangrene,” recalls Jennifer. “They worked tirelessly for Jonathan, wrapping and treating his limbs every single day and sometimes even twice a day. They even ordered special oxygen pumps.”

Before his illness, Jonathan was the picture of health, and he and Jennifer were determined to help him get back to as normal and active a life as possible. “GW Hospital and the doctors there are on the cutting edge of medicine,” says Jennifer. “Being able to give all the information to patients is incredibly helpful because feeling like you have some options gives you hope.”

When Jonathan and Jennifer returned home to California, Jonathan had his left hand amputated and they pursued the possibility of a hand transplant. The care at GW Hospital helped make him a strong candidate. He spent months working to get stronger for the transplant procedure and underwent the emotional loss of the lower part of his right leg, as well as his toes and part of his fingers on his right hand; but he remained determined. The transplant was successfully performed in October 2016.

In the midst of his recovery, Jonathan fulfilled a proposal he made at GW Hospital. He married Jennifer in a quiet ceremony in their backyard.

As they walked hand-in-hand into GW Hospital earlier this year for a reunion with the medical team, emotions were high. Even though they were far from home, they were with family. “Thank you for saving my husband’s life,” said Jennifer. “Thank you so much, just for everything.”