“I knew my husband was having a stroke ...” | George Washington University Hospital 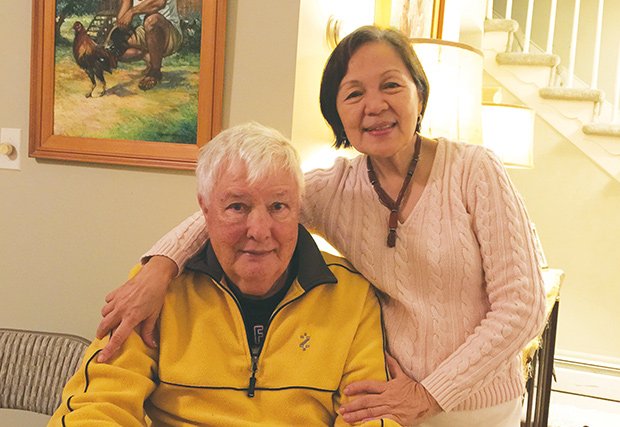 Jim Taylor survives a massive stroke, thanks to the quick action of his wife and the team at GW Hospital.

On November 16, 2015, Teresa Taylor’s husband, Jim, was reading in his home office. “I went to check on him before leaving to run errands, and noticed his face was twitching, his speech was slurred, his head was drooping and his arms were just hanging down,” says Teresa. “He was having a stroke - he had all the symptoms.”

Teresa called 9-1-1, and the paramedics took Jim to the Center for Trauma and Critical Care at the George Washington University Hospital. “Luckily, Teresa knew
the signs of a stroke,” says Kathleen Burger, DO, Neurologist and Director of the Stroke Center at GW Hospital.

“Jim arrived quickly and was given tPA, a clot-dissolving medication. He had a slight improvement there,” says Dr. Burger. “Then we assessed his intravenous and endovascular systems by injecting dye into his arteries and found the clot, which was promptly extracted.” After the procedure, Jim was able to talk, raise his arms and walk, with no residual damage.

“With the brain, if there is a clot, there is no backup blood flow supply, so after about six hours without circulation, the success of surgical intervention is cut dramatically,” says Dr. Sigounas.

Wayne J. Olan, MD, Director of Minimally Invasive Neurosurgery, treated Jim in the ER. “Testing confirmed that his right cerebral artery was narrowed, so we scheduled him to come back for a stent procedure,” says Dr. Olan. “By placing the stent, we prevented another stroke from occurring.”

Goal: treatment within 30 minutes of arrival

The hospital’s designation as a Comprehensive Stroke Center (CSC) has caused an increase in patient volume and community awareness.

“We’re the CSC closest to the White House, and we’ve become known as the place to go. Our outcomes have been spectacular,” says Dr. Olan. “Our goal is to have treatment initiated within 30 minutes of the patient’s arrival at the hospital,” says Dr. Olan.

Dr. Sigounas echoes Dr. Olan’s sentiments. “One stroke can add years to your brain age, and time lost is brain lost. First responders notify us if there’s a stroke patient coming in, and we activate the notification system. It’s incredibly responsive and impressive to watch,” he says. “I live close by, so if I am on call, I can get to the hospital within minutes of an emergency.”

Teresa says this was their first time at GW Hospital.

“Jim is retired from the Navy, so he usually goes to Walter Reed Medical Center. But GW Hospital was the closest trauma center to us,” says Teresa.

She was glad to see posters in the hallways about signs of stroke. “It’s good to remind people about that,” she says. “I’m glad I knew the signs of stroke – that and GW Hospital helped to save my husband’s life!”