Each year, the trauma team at The George Washington University Hospital gathers to reunite with patients and recognize some of their most complex trauma cases during their Trauma Survivors Day. The emotional stories shared during this year’s 7th annual event show the amazing triumphs that can be achieved when determined patients and a committed care team partner to overcome all challenges. The purpose of this event is to celebrate the results of this collective effort, mainly the patients’ remarkable stories and their miraculous recoveries. Here are their stories. 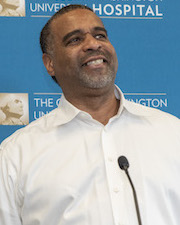 In October 2017, Dewayne Brown was shot at his home by a neighbor over a dispute. The gunshot pierced his heart and lung. He was rushed to GW Hospital and taken to the OR where the surgeons were able to repair both organs. He required an additional surgery a few days later. After spending 20 days in the hospital, including 10 in a coma, Dewayne was transferred to an acute rehab center where he continued his recovery.

“I don’t really like talking about this, but I know it’s a part of my recovery,” said Dewayne. “I was shot and left for dead, and my God blessed me with enough strength to dial 911. I remember thinking I was in the best care facility I could be in. I remember the nurses, they did their job with a passion and they made me feel much better and I was so thankful to be around them because they really helped me get through. When I was able to get out of the house and see my friends, everybody said that I looked good, and that’s only a testimony to the good work at GW, the doctors, my family, and of course God. I’m just so thankful to be here today, and I want to say to everyone, have a safe and happy holidays.”

Learn more about Dewayne and his story > 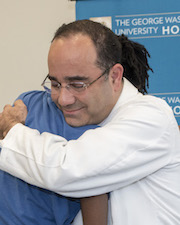 Corey was only 15 when he was shot in the chest and back. The gunshots hit his heart, liver, stomach, diaphragm, and intestines. He was quickly taken to the OR at GW Hospital, but he went into full cardiac arrest and his heart stopped beating. His chest was opened and the surgeons were able to get control of the bleeding of his heart. “Because Corey was so young and strong, he bounced right back,” said Dr. Babak Sarani, Director of Trauma and Acute Care Surgery at GW Hospital. The surgeons were then able to fix the damage to his organs. Corey received 45 units of blood that night. He was hospitalized for 18 days. “I saw him for his first post-operative visit and I so looked forward to seeing him,” said Dr. Sarani. “I said to him, ‘Corey, seeing you makes me happy.’

“The fact that Dewayne and Corey are alive is a testimony to the incredible teamwork between ER physicians, nurses, technicians, the trauma team as a whole, the department of anesthesiology, the operating room which stands ready 24/7 for any possible case with no notification whatsoever, the blood bank which is able to keep sending us blood to keep patients alive as long as necessary, the ICU, cardiac surgery, thoracic surgery, and radiology. Everyone came together to rescue these two,” said Dr. Sarani.

Getting Home to Their Family 3,000 Miles Away 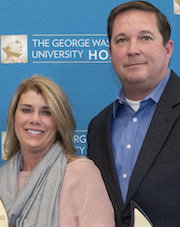 In May 2018, John and Tracey Jacobsen from Long Beach, California, were visiting D.C. when one night after leaving a restaurant they were hit by a car traveling around 45 mph. John, a captain in the Long Beach Fire Department, broke nine ribs and his breastbone, punctured his lung and tore his liver. He was admitted to the ICU and with the help of the acute pain service at GW Hospital, the team was able to ween him off narcotics very quickly. The therapists then helped get him mobilized and back on his feet and able to care for himself. Throughout his hospital stay, all he cared about was his wife and children. “Captain Jacobsen, your commitment to your family and your ability to withstand what must have been excruciating pain inspires me to this day,” stated Dr. Sarani.

“Everyone at this hospital treated us like family from the moment we got here to the day that we left,” said Captain Jacobsen. “I can’t say enough, from the doctors to the nurses to the staff, everybody, they treated us above and beyond.”

Tracey Jacobsen was more severely injured than her husband. She broke 10 ribs, punctured her lung, tore her spleen and diaphragm, and ruptured her stomach. With the help of the interventional radiology department, the team at GW Hospital was able to control the bleeding and stabilize her condition. She then went to the OR where she underwent repair of the diaphragm and stomach. Tracey developed severe septic shock from the ruptured stomach, which led to very rapid onset of heart failure. With the help of the cardiac surgery team, she was placed on a heart/lung bypass machine for five days. She required three more operations and was discharged six weeks after arriving at the hospital.

“I am really blessed and thankful that I was at GW Hospital, the doctors and nurses that got me home to my family because it was really hard to be 3,000 miles away from my family and my kids,” said Tracey. “My recovery is going great. I’m almost back to my regular routine. I walk 2-4 miles a day. I have minimal pain, and I hope to be back on the tennis court with my team. I’m determined to be better than before. It was hard for me to be so far from home, but I’m thankful. I was in a hospital that could provide me with the best care ever. I am so grateful for all the staff at GW! I think about you every day and thank God for you.”

Not a Typical Day On the Job 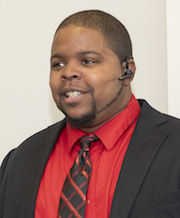 While on the job making a delivery in January 2018, Michael was hit from behind by a car and his leg was pinned between the car and his delivery truck. He was taken to GW Hospital with a very severe injury to his leg, but all vital structures were intact. The trauma team worked with the orthopedic and plastic surgery teams, the acute pain service, rehab specialists and therapists to save Michael’s leg. After 13 operations, Michael has made great progress. “I could have died that day, I should have died that day, but your awesome help and fast action saved my life,” said Michael. “I just think positive, thank God, and keep pushing forward.”

The Center for Trauma and Critical Care at GW Hospital

“Saving the life of a fellow human being requires the combined strength and labor of a patient, their family and support structure, well trained and committed hospital personnel, who stand ready 24/7 to respond regardless of the circumstances involved, and the entire hospital,” said Dr. Sarani. “The Center for Trauma and Critical Care is tasked not just with relieving pain and suffering, but for saving lives.”

“GW Hospital is proud to be designated a Level 1 trauma center where we care for some of the most severely and critically injured individuals,” said Kimberly Russo, CEO and Managing Director, GW Hospital. “We are all honored to serve our community and this region in this support role. We know that when a trauma patient comes through our doors, he or she is likely experiencing one of the worst moments of their lives. Every single member of our team springs into action to help care for the trauma patient.”

GW Hospital also offers a Trauma Survivors Peer Support Group, which seeks to provide support to people who have been severely injured. It’s the next step in the journey, for emotional healing, physical healing, mental healing, and spiritual reconnections.